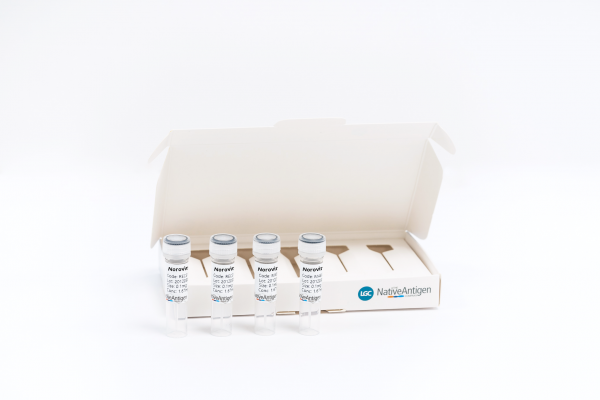 Oxford, UK: The Native Antigen Company (part of LGC Clinical Diagnostics), one of the world’s leading suppliers of reagents that enables research into vaccines and diagnostics for emerging and endemic infectious diseases, has announced the expansion of its norovirus-like particle range, with the addition of six new reagents, including four which are unique to the market. These virus-like particles (VLPs) are suitable for studies of norovirus protein structure and the research and development of vaccines and in vitro diagnostic assays.

The Native Antigen Company’s full norovirus-like particle range now comprises eight genotypes, four of which are unique to the market, GII.2, GII.6, GII.10 and GIX.1, as well as GI.3 and GII.17. The VLPs are suitable for a wide range of applications, including the development of serological assays, generation of anti-norovirus antibodies and studies of VLP structure. This expanded range adds to the Company’s extensive selection of recombinant VLPs for infectious disease R&D.

The Company specialises in the manufacture and purification of native and recombinant antigens and antibodies for viral and bacterial pathogens, offering researchers a reliable source of high-quality reagents for immunoassay development and manufacturing. The Company’s norovirus VP1 structural proteins are produced in its proprietary VirtuE™ (HEK293) and insect-baculovirus expression systems to form particles without the non-structural proteins or genome. The resulting high-purity VLPs display native-like epitopes and glycosylation patterns, while being non-infectious and safe to use.

Ish Jalal, Commercial Director, The Native Antigen Company, said: “Multiple novel norovirus strains have emerged in recent years, constituting a significant and growing health burden in both the developed and developing world. The high mutation rate of noroviruses and subsequent emergence of multiple strains has made the development of diagnostics and vaccines particularly challenging. By expanding The Native Antigen Company’s unique range of norovirus-like particles we hope to continue supporting cutting-edge research and development into this highly contagious disease.”

Norovirus is a small non-enveloped, positive-sense RNA virus belonging to the Caliciviridae family. It is a major cause of non-bacterial acute gastroenteritis outbreaks, with symptoms including vomiting, nausea, abdominal cramps and diarrhoea. Six norovirus genogroups have been identified to date, which are further subdivided into genotypes.